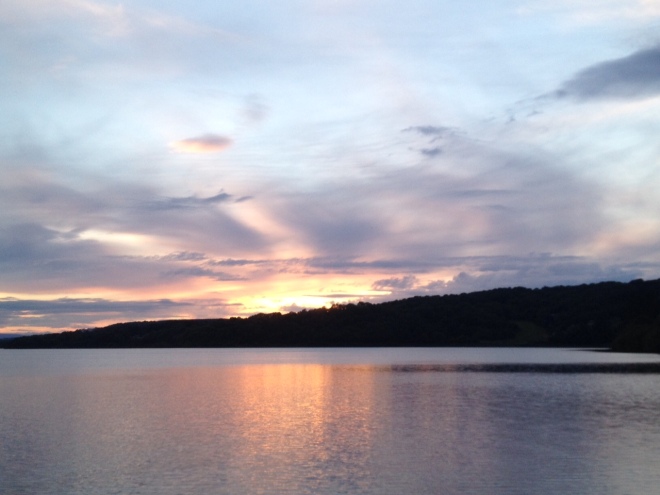 Had I the heavens’ embroidered cloths,
Enwrought with golden and silver light,
The blue and the dim and the dark cloths
Of night and light and the half light,
I would spread the cloths under your feet:
But I, being poor, have only my dreams;
I have spread my dreams under your feet;
Tread softly because you tread on my dreams.

Northwestern Ireland is nicknamed “Yeats Country,” as many of the places here were inspiration for Irish Nobel Prize-winning poet William Butler Yeats. 2015 marks the 150th anniversary of Yeats’ birth and the Sligo Tourism Board has worked diligently to make sure everyone celebrates it. Traveling the roadways, signs point to “Lake Isle of Innisfree,” “Hazelwood,” “Dooney Rock,” “Slish Wood,” “Glencar Waterfall,” and to Yeats’ grave at Drumcliffe, in the shadow of Benbulben. Recently, forensic scientists revealed they aren’t sure it is Yeats’ bones that are buried in Drumcliffe (click here for a local story), but to locals it doesn’t matter whose bones are there; Drumcliffe lays claim to his grave. 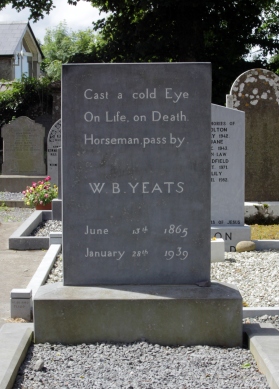 Under bare Ben Bulben’s head
In Drumcliff churchyard Yeats is laid.
An ancestor was rector there
Long years ago, a church stands near,
By the road an ancient cross.
No marble, no conventional phrase;
On limestone quarried near the spot
By his command these words are cut:
Cast a cold eye
On life, on death.
Horseman, pass by!

I sought to discover why Yeats was so inspired by this area. In my six days in Counties Sligo, Leitrim, and even tiny bits of Cavan, Fermanagh, and Donegal, I found several thin places. While Yeats didn’t use that term, I believe he knew they existed, and thin places were responsible, in part for many of his poems (his unrequited love for Maud Gonne was also a significant inspiration, but that’s another story!). Yeats loved the area so much, even though he had been born in Dublin, he requested that he be buried under the watchful eye of Benbulben, the “table” mountain that towers over the pastoral fields of Sligo. 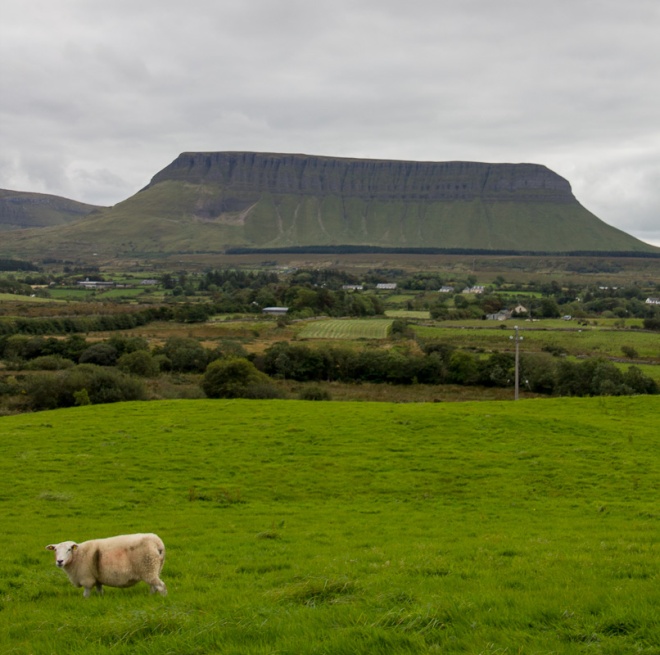 Ben Bulben, a table mountain, from the West 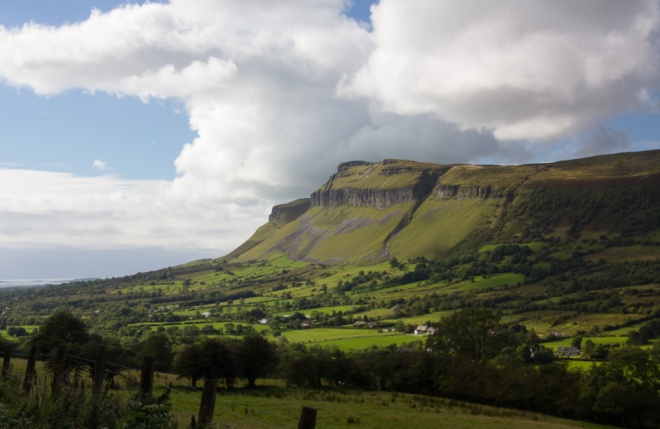 Ben Bulben from the Southeast 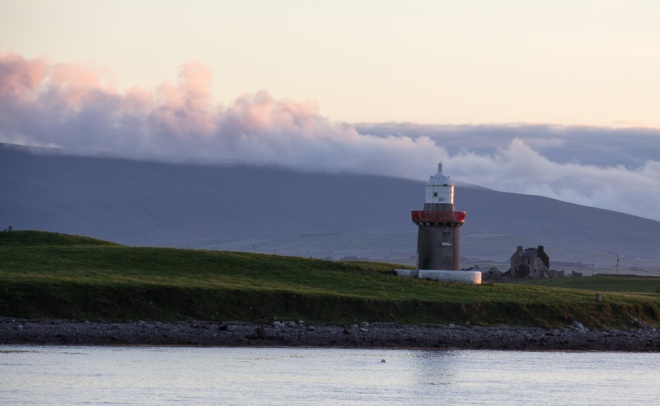 Rosses Point is slightly northwest of Sligo Town, and it, as well as the pristine Glencar Waterfall, are referenced in Yeats’ poem, The Stolen Child. Glencar is 11 km northeast of Sligo Town. 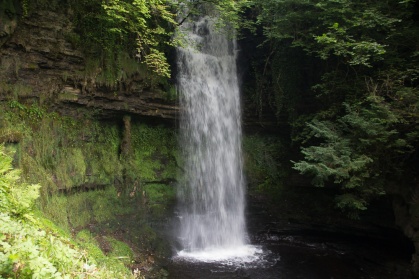 Where the wandering water gushes
From the hills above Glen-Car,
In pools among the rushes
That scarce could bathe a star,
We seek for slumbering trout
And whispering in their ears
Give them unquiet dreams;
Leaning softly out
From ferns that drop their tears
Over the young streams.
Come away, O human child!
To the waters and the wild
With a faery, hand in hand,
For the world’s more full of weeping than you can understand. 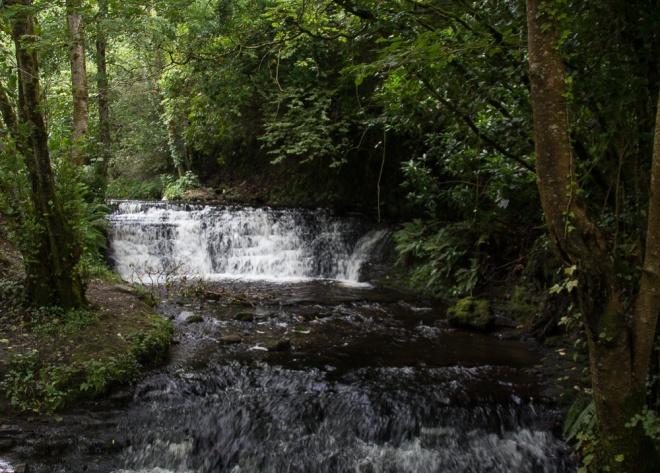 Glencar Waterfall cascades 50 feet (15 meters) before flowing into Glencar Lough, and as I walked these grounds, I understood why Yeats wrote of the possibility of faeries being here, whisking away young, innocent children at play in this charming, enchanted place.

Lough Gill stretches east from Sligo Town to Dromahair in Leitrim, about 8 km. This beautiful lake inspired many of Yeats’ poems, but most significant to me, The Lake Isle of Innisfree. I’ll write more thoroughly about this location in the next installment, but Yeats wrote this poem in England, when he was homesick for Sligo. The Lake Isle of Innisfree is probably Yeats’ most famous poem and literally every Irish person I spoke with had memorized it as a young child. This mystical place is embedded in the Irish soul. 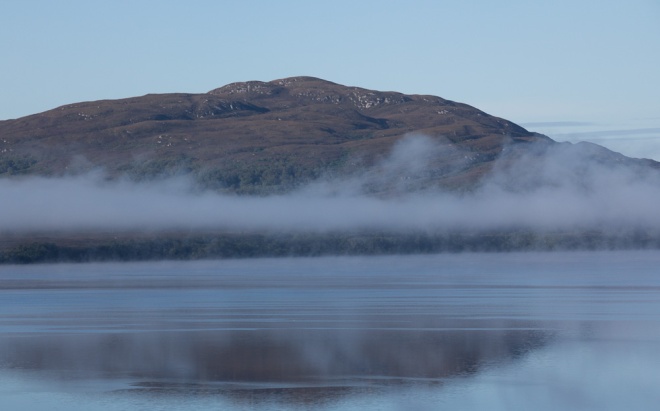 “The Lake Isle of Innisfree”

I will arise and go now, and go to Innisfree,
And a small cabin build there, of clay and wattles made;
Nine bean-rows will I have there, a hive for the honey-bee,
And live alone in the bee-loud glade.

And I shall have some peace there, for peace comes dropping slow,
Dropping from the veils of the morning to where the cricket sings;
There midnight’s all a glimmer, and noon a purple glow,
And evening full of the linnet’s wings.

I will arise and go now, for always night and day
I hear lake water lapping with low sounds by the shore;
While I stand on the roadway, or on the pavements grey,
I hear it in the deep heart’s core. 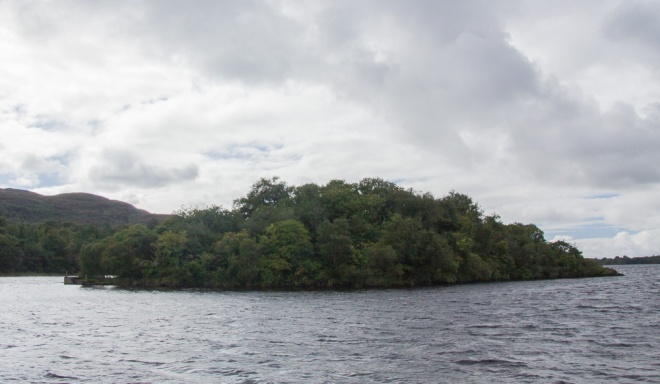 The Lake Isle of Innisfree

Yeats referenced several more County Sligo locations in his poems and the ones with which I am familiar are The Song of Wandering Aengus (click here for an amazing oral recitation of this poem by actor Michael Gambon), The Fiddler of Dooney, Red Hanrahan’s Song about Ireland, The Man Who Dreamed of Faeryland, and The Hosting of the Sidhe. I encourage you to check out these, as well as other poems by Yeats, at this website: http://www.poemhunter.com/william-butler-yeats/. 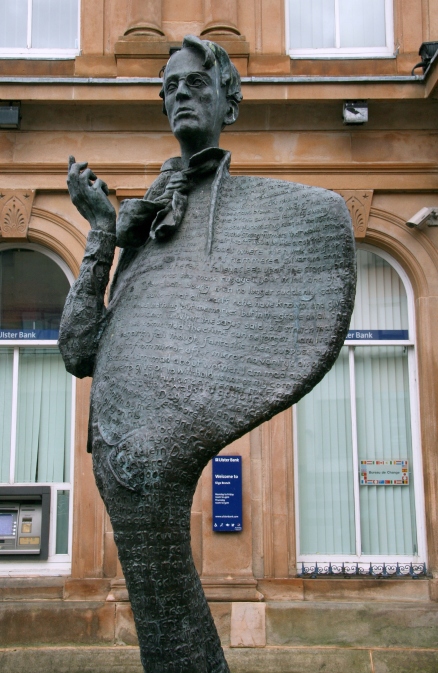 Additionally, one of the special websites created for the 150th anniversary is here: http://yeats2015.com/ and from this site, I learned that a local pub, Hargadon’s in Sligo town centre, hosts a poetry reading every day at 1:00 pm (and of course, I went one day!) for the entire year. The Yeats Memorial Building is also in Sligo.

I will end with one of my favorite WB poems. It is wistful and makes me yearn for my husband and the days we had together in Ireland. But as I traveled Yeats country, I know, deep in my soul, he was there with me. 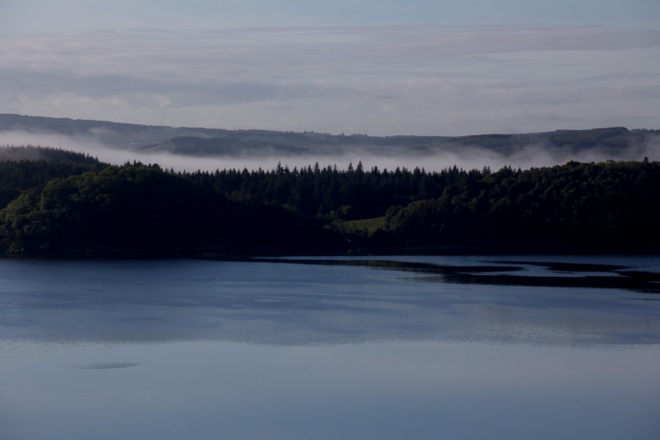 When you are old and grey and full of sleep,
And nodding by the fire, take down this book,
And slowly read, and dream of the soft look
Your eyes had once, and of their shadows deep;

How many loved your moments of glad grace,
And loved your beauty with love false or true,
But one man loved the pilgrim soul in you,
And loved the sorrows of your changing face;

And bending down beside the glowing bars,
Murmur, a little sadly, how Love fled
And paced upon the mountains overhead
And hid his face amid a crowd of stars. 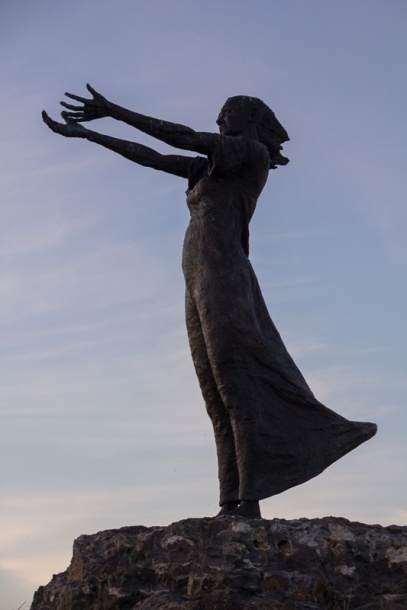