The little rock on the left that sidelined me for a while.

My journey was sidelined last week with a serious sprain and while nursing it, I fell behind in my postings. I’m doing better now, but still have weakness in my left ankle. Where did this accident occur? On the beautiful Dingle Peninsula, which is the topic of this post.

I arrived on the peninsula early afternoon on the same day as the Dingle Marathon and Half-Marathon. This didn’t really affect me other than Dingle town was incredibly busy for dinner that evening. That afternoon, I headed to Lough Annascaul, just a few km north of Annascaul, which is also the hometown of Antarctic explorer Tom Crean (I even had lunch at the South Pole Inn!). Driving to the lough was an experience in itself as at one point, I had to get out of the car, open a gate blocking the narrow one-lane road, drive through, and then shut the gate. Regardless, the location was astounding. 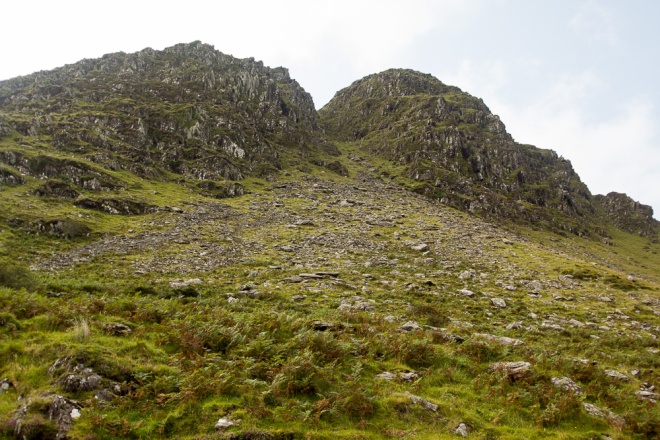 Terrain above the Lough

Into the Valley above Lough Annascaul

Lough Annascaul lies in the valley between two mountains, Ballynasare and Dromavally, part of the Slieve Mish range. I parked beside two cars in the tiny pulloff on the side of the lough, but no one was in sight. No one. Except sheep high on the mountains above me, before me, and beside me. My plan had been to hike into the valley, beyond the lough, but this was where I had my ill-fated step off a wobbly rock and I hurt my ankle. I had managed to take some photos before my fall, and after taking a few more, hobbled back to my car and then B&B where my host took great care, giving me ice-packs and Kytta-Salbe, a German cream that worked wonders.

I’m afraid the ankle slowed me down quite a bit. The following day I did the Slea Head drive, stopping first at one of my favorite spots in all the world, the cemetery at Ventry, overlooking the beach. It was simply a gorgeous day, and rather than walk, I sat in the sun on the rocks for over an hour. Also, I’m including what I think is one of the most beautiful epitaphs I’ve ever read. I just nodded my head in agreement. 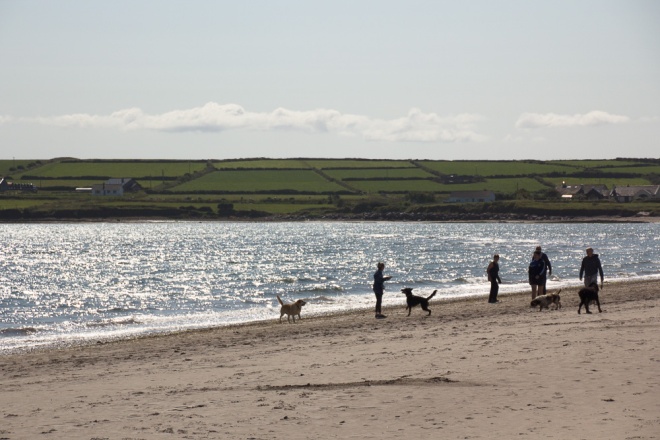 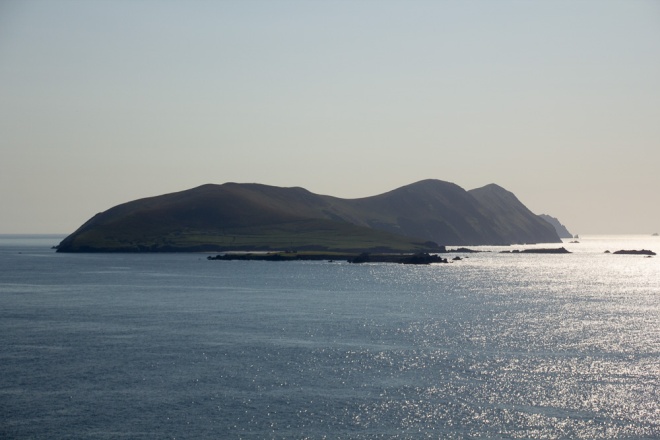 I continued on to Dún Chaoin or in the English, Dunquin. Much of the Dingle Peninsula is a Gaeltacht region, where Irish is the predominant language still spoken by residents. Dún Chaoin and Baile an Fheirtéaraigh (Ballyferriter) are two of these Gaeltacht villages. I stopped in at the Blasket Centre, an OPW site (click here for more information). The Blasket Centre documents what life was like on the Blasket Islands off the western coast of Dún Chaoin, especially on the Great Blasket Island (An Blascaod Mór), which was inhabited until the last of the islanders were evacuated in 1953. An interesting thing I learned was in the early to mid 1900s, Great Blasket Island became a haven for writers in the Irish language, and several notable authors had their works published. Check this link for information about many of these writers. I had so wanted to take the ferry to the Great Blasket, but knew I couldn’t traverse the rocky hills. Perhaps next time.

Dingle is home to many megalithic and monastic sites. Located a short distance from Ballyferriter still on the Slea Head drive, I stopped at a beautiful standing stone located a short distance from the road. It was at the base of a mountain and overlooks the Atlantic, with the Three Sisters Hills near Smerwick in the distance. Again, what a special place to raise an ancient standing stone and circle. I don’t know the name of this majestic place, but its location is superb. 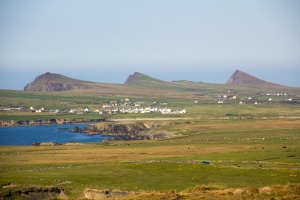 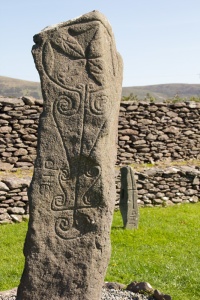 Riasc also in this area, located outside Ballyferriter, is an amazing thin place. I learned of, and was driven to, Riasc, by new friends Martin and Mary. Riasc, or Reask, in English, is the site of a small monastic site dating to the 6th or 7th century and was only excavated in the 1970s. The ruins consist of a small oratory (church), burial grounds, several clocháns or small huts, and decorated stone slabs. What is most notable about this site is the large standing stone that has both Celtic and Christian engravings. The stone is over 5 feet tall and is in remarkable condition. My friend pointed out to me the engraving DNE, which in Latin stands for Domine, or “O Lord.” I could have spent hours here, but other places beckoned. 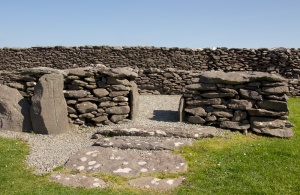 Of course, one of the most iconic sites near here is the Gallarus Oratory, built probably between the 7th and 8th centuries. The Gallarus is notable because it is constructed of perfectly dry fitted stones, meaning without mortar, and it still stands today. 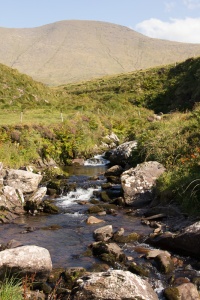 I find myself consistently being drawn to water, which is not unusual when you’re on a peninsula. I visited five other “water” sites on the Dingle Peninsula, besides Lough Annascaul and Ventry Beach. Listed below are photos of these places, but the only one I wish to highlight is Brandon Creek, the location from which St. Brendan the Navigator (Patron Saint of Sailors) is reported to have set sail in 535 AD. Many believe St. Brendan eventually landed in Newfoundland in North America before returning to Ireland. 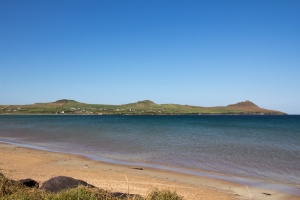 The Three Sisters from Béal Bán

Alone at the top of the world at Brandon Point

Smerwick Harbor with another view of those sisters

Corca Dhuibhne, Dingle Peninsula, you always touch my soul. This trip, you also touched my ankle, but that will heal. The visions and memories (don’t you believe they are intertwined?), however, will last forever.