I spent several days wandering the narrow lanes of the Beara in search of ancient sacred places. While I had an idea of some places I wanted to visit, I also discovered some unexpected treasures in my meanderings. The Irish people have done an excellent job of preserving many of their historical treasures, and periodically, you’ll come across a brown street sign identifying some of these places that aren’t even on regular maps.

Just a few km northwest of Castletownbere is a beautiful standing stone circle at Derreentaggart West. It is in the middle of an accessible field, and the day I visited, the area around the circle had been recently mowed and was quite mucky. The stones here are large and while some have fallen, the circle is generally intact. 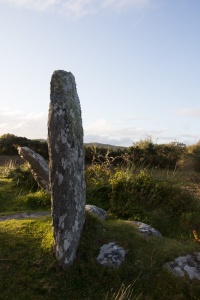 From this location, you could see the lighthouse on Bere Island to the south, and the Miskish Mountains to the east.

Driving from Castletownbere, as I approached the colorful village of Allihies, I saw another brown sign, this one for “Children of Lir Grave.” Knowing the myth, I drove a short distance up the road to the site. 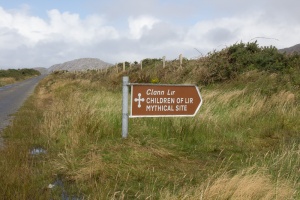 The legend about the Children of Lir is that after their mother died, the children’s father, Lir, married his wife’s sister. She became extremely jealous of Lir’s devotion to his children so she turned them into swans, for nine centuries. After 900 years passed, the swans flew to Allihies, where they were returned to their human form, but they were quite old and died almost immediately. The legend is that they are buried here, under large white rocks. All that remains is a single rock, and on it, offerings were left to the children. 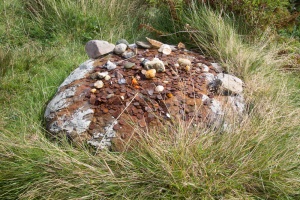 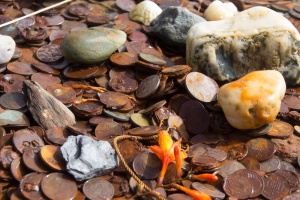 I stopped at a little café and museum in Allihies, the Copper Café, and discovered it also housed a lovely little art gallery. While not an antiquity, I had to show what a beautiful exhibition space it is (for my photographer friends)!

On the road from Allihies to Eyeries, I unexpectedly came upon a mass rock. During the Penal Times in the early 18th century, religious persecution of Catholics was rampant, and assembling and practicing one’s faith was dangerous. (For a quick summary, click here to read more about the Penal Laws.)

Beginning of the path to the distant Mass Rock.

As a result, parishioners would assemble in obscure locations to observe mass, where large flat rocks served as altars, sometimes marked by a simple cross. Driving through the mountains, I came upon a roadside marker for Carraig an Aifrinn or Mass Rock. It was a little bit of a hike up the mountain on a rock and mud path, and as I walked I thought of the people who had traversed this same path over 200 years ago, simply to practice their religion.

I climbed the hill and sent some sheep scampering upward. The site was lovely, overlooking the ocean, with the rocky mount behind. Someone had erected a large cross at the site, which would not have been there during the time the mass rock was in use. I reflected on how fortunate I am to freely practice any religion or have any kind of personal beliefs, without fear. I said a prayer for all those, both then and now in the world, who do not have such freedom.

North of another colorful village, Eyeries on the northern coast of the Beara Peninsula, is an area with three interesting megalithic sites. I am grateful to the woman at the Eyeries Post Office for telling me how to find these locations on the way to Kilcatherine Point. The first of these is a large Ogham Stone located near Faunkill and the Woods, believed to be the tallest ogham-inscribed stone in Ireland. Ogham is an ancient writing system, sometimes known as the Celtic Tree Alphabet. Click here for more information. This ogham stone is on private property and I could not get close to see it, but even from the harbor at Coulaugh Bay, it was impressive.

Driving along the narrow road to Kilcatherine, I found An Cailleach Bhéara, the Hag of Beara.

There are many legends about the Hag, including that she was Mother Earth and Protector of the Land. Most of the legends indicate that she was a powerful woman who chose to turn herself into the rock so there would always be a hag to keep watch. I made my way down to the overlook and there she was, facing the sea. Now I don’t recognize her shape as a hag, but who am I to argue? Again, people had left offerings here for An Cailleach: coins, notes, seashells, fishhooks, earrings, scarves, even a screw. I had brought nothing, but I searched and found an interesting rock, and with my best intentions, I left it for her.

From here, it was just a short distance to the old graveyard and stone church at Kilcatherine. This was a hauntingly beautiful location and I spent quite a bit of time walking among the graves and stones. There are some recent memorials, but many of the graves are marked by simple rocks, now covered over with grass. I generally find graveyards to be serene and peaceful. Here, as at all of the sites I’ve mentioned in this posting, I was alone, in complete solitude. There are many places where one can be still on the Beara Peninsula.

Finally, I am including photos of a beautiful, though not ancient, place called the Dzogchen Beara Meditation Retreat Center, http://dzogchenbeara.org/ located high on a hill overlooking the ocean towards the Sheep Head Peninsula. I had originally learned of this place when my husband was ill. They offer different retreats, both for people dealing with terminal illness and for those who are bereaved, and also have a hostel, café, and other facilities open to the public. The scenery is amazing, and the meditation room has an unobstructed view of the ocean. 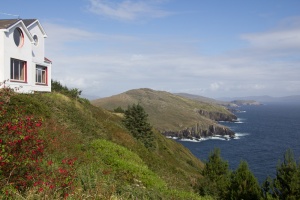 While I had never participated in a group meditation before, I attended and found it a peaceful, meaningful experience. The 45 minute guided meditation is offered daily, year round, and consists of 5-10 minutes of resting and settling one’s mind, followed by a 25-30 minute practice of Loving Kindness. The meditation is simply quiet, focused prayer, for oneself and for others, sending love and healing to the world.

Before I left Dzogchen Beara, I lit candles, for my late husband and loved ones. This practice of remembering, embracing, and celebrating their lives, in this special place of quiet and calm, will always be in my heart. Thank you, Beara Peninsula, for your quiet, thin places. 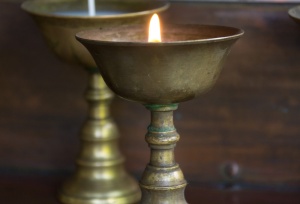 2 thoughts on “Sacred Sites on the Beara Peninsula”