Glengarriff in County Cork is known as the Garden of Ireland, and staying in this beautiful village at the southeastern entry to the Beara Peninsula was wonderful. While the village is small, it is a gateway to a variety of places. Here I focus on areas of natural beauty, but not necessarily mystical thin places. Still, some of these locations spoke to my soul, which is why I have chosen to include them here. I’ve had the pleasure this week of traveling with my two dear friends, Jamie and Larry Williamson, from the States.

Healy Pass on the Kerry side 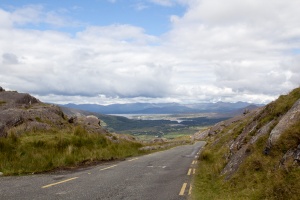 Healy Pass on the Cork side

From Glengarriff heading west back down the Beara Peninsula, I headed north from Adrigole along the R574 road that crosses the Healy Pass, located on the border between Counties Cork and Kerry.

The Healy Pass is one of the north-south routes across the peninsula and crosses the Caha Mountains. Built in 1847, during the famine times, to prevent starvation, it was named after Tim Healy, the first Governor General of Ireland. According to a sign posted at the top of Healy Pass, “where Cork meets Kerry, funeral processions stopped and at this point, pushed the corpse in the coffin over the border. The awaiting people then took the coffin from the opposite county.

Flat Rock at the top of Healy Pass

This is now called the famous Flat Rock.” The views are simply breathtaking, whether passing coffins or not.

After lunching in Kenmare, our drive back to Glengarriff took us along the N71 through the Caha Pass. The scenery and views were again spectacular, and looking south, I could see Bantry Bay in the distance. The rugged rocks of the mountains dominate the lush sheep-dotted green. This is Ireland. 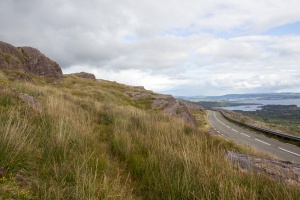 Our second day of driving took us to the Mizen Head Peninsula, the most eastern of the three Cork peninsulas. Winding our way down through narrow, curving roads, we kept gasping at the amazing scenery. 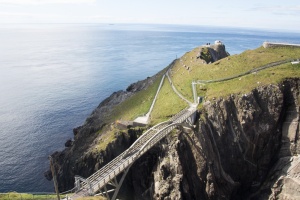 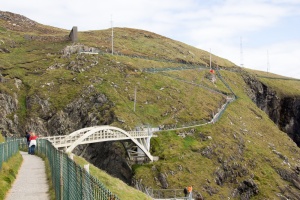 Gap between the island and mainland at Mizen Head

At the very end is the Mizen Head signal station, a place where Guglielmo Marconi established one of his transatlantic telegraph stations (another is at Malin Head in County Donegal, the northern most point in Ireland). To reach the Signal Station, we trekked down a rather steep paved path at a 20 degree angle, and then crossed a bridge that leads to the little rock island. This is the most southwesterly point in Ireland. 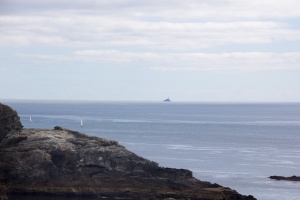 Fastnet Rock in the distance, the ‘Teardrop of Ireland’

Nine miles to the southeast of Mizen Head, lies the lighthouse at Fastnet Rock. Known as the ‘Teardrop of Ireland,’ Fastnet Rock is the most southern point in Ireland and was the last light Irish emigrants saw on their journey from Cobh to North America.

Just a few kilometers north of Mizen Head is the little harbor village of Crookhaven where ships would pick up provisions for their transatlantic journey. The harbor has several pubs and restaurants and I had a wonderful seafood chowder outside of O’Sullivan’s Pub, described as home of the ‘most southern PINT in Ireland.’ 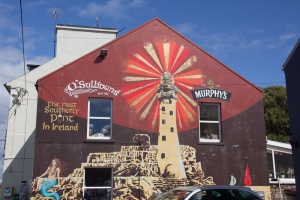 Leaving Crookhaven we spied the amazing blue flag beaches at Barleycove with its very sandy shore. Mizen Head was a treasure, and the quiet, majestic beauty inspired us to reflect on the challenges and joys of journeying to new places.

Thursday led us to Gougane Barra, which I will highlight in the next entry, but on the way, we stopped at Cariganass Castle, whose name means Rock of the Waterfall, outside the village of Kealkill. The castle, built around 1540, was the ancestral home of the O’Sullivan Beare clan, and its remains overlook Ouvane River. For some interesting information about the Castle, click here.

The last place near Glengarriff we visited was Ilnacullin or Garinish Island, accessible by two ferry companies in Glengarriff. This site, maintained by the Ireland OPW (Office of Public Works) is a 37- acre botanical paradise created in 1910 by Annan Bryce, then owner of the island and Harold Peto, architect and garden designer. In 1953, Bryce gave the island to the people of Ireland.

In addition to the lovely landscaped gardens and buildings, Garinish also has a Martello tower, one of many built during the early 19th century by the British to defend against Napoleon.

The gardens are absolutely lovely and include many trees and plants native to Australia, New Zealand, and even Mongolia. The temperate climate along the south coast of Ireland supports incredible biodiversity and as such, this place is treasured by botanists the world over. As an aside, we also passed the former home of Irish film star, Maureen O’Hara who lived in the Glen for many years, as well as Seal Island.

A visit to Garinish Island on a warm September day was a wonderful way to end our week in Glengarriff.