The Beara Peninsula, in the far southwestern corner of Ireland is AMAZING! The landscape is absolutely spectacular and because the roads are incredibly narrow, there are no tour buses and very few campers, or caravans, as they are called here. The Beara is only 30 miles (48 km) long, but driving the Ring of Beara from Glengarriff in Cork to Kenmare in Kerry, is roughly 98 km. There are two mountain ranges, Slieve Miskish and the Caha Mountains. Castletownbere is the largest white fishing port in Ireland. Click here for a map of the area and the Ring of Beara driving route.

Ireland’s only cable car, view from the mainland to Dursey Island.

I met a new friend, Sabine, from Germany at my B&B, and we hiked an area known as Crow Head, located at the very western tip, across from Dursey Island and its famous cable car (which I did not ride!). The Crow Head walk was about 3 miles from where I parked my car to the end and we passed both open meadows and sea cliffs, and a few sheep. We were the only people the entire time we were there, and I’ve never experienced such quiet. The only sound was the wind whipping through the grass and flowers, save a few gulls, and one lone crow who flew overhead on our way back. This little peninsula is known to be a good spot to see dolphins and whales, but the water was too choppy and we didn’t see any.

The gorse was thick carpet underfoot, almost spongy, and the trail, little more than a sheep path, was sometimes difficult to walk. There wasn’t a single tree here; no shelter or shade. Near the middle of the small peninsula, on the northern side, I found two small cairns, conical piles of rock. I sat near one for quite a while, wondering who had built them and when. There are no loose boulders visible, as there often are in other parts of the Beara Peninsula, so it is a mystery as to how these came to be.

At the end of Crow Head, cliffs drop dramatically to the wild Atlantic, and directly across is another small island of black rock, topped with grass. It had been a difficult walk for a non-hiker and I was physically exhausted and looked for a place to rest. I finally found a small sheltered area, a cranny in the rock, overlooking the island. I withdrew in the stillness of this space as I rested and marveled at the raw power surrounding me: in the hard, jagged rock, the crashing waves, the gusty relentless wind – and realized I had found one of my thin places. A place I never would have come with my husband. A place I would not have known existed save for my host at the B&B. But I found it. I found peace and strength and courage here, at Crow Head, at the end of the wild Beara Peninsula. 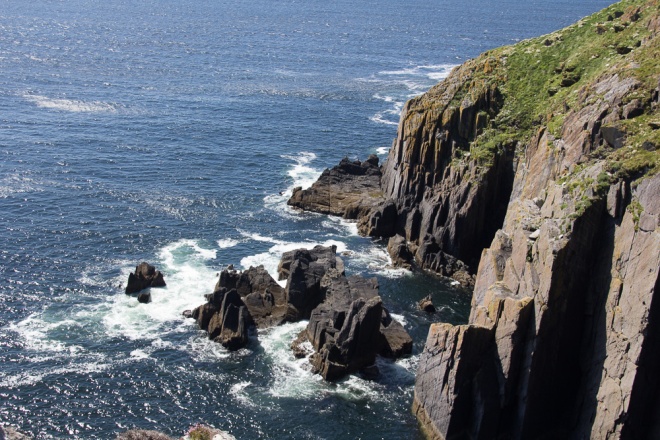 Land’s end, at the tip of Crow Head

One thought on “Crow Head on the Beara Peninsula”