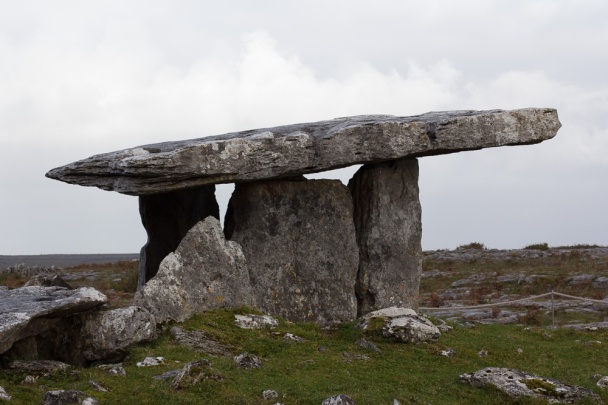 There are several types of historical sites in Ireland, including megalithic sites that date from the Stone Age, places that are considered sacred because of Christian or pre-Christian significance, some are remnants of Norman, Viking, or English domination, and finally, places that pertain to Irish rebellion, independence, or An Gorta Mor, the Great Famine. I’m focusing here on those sites in or near County Clare that gave me “good vibrations,” the places that resonated deeply with me. 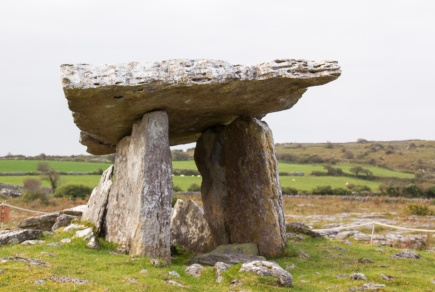 One of the most well known Stone Age sites in County Clare is the Poulnabrone Dolmen, frequently referred to as the Hole of Sorrows. Poulnabrone is a portal tomb, with a flat stone resting atop other vertical stones, and was probably built between 2500 and 4000 BC. In 1985, during excavation after one of the standing slabs cracked, skeletal remains of over 22 people, including a newborn infant, were found under the dolmen. The tomb stands on limestone pavement in the Burren, just off the road between Ballyvaughan and Corofin. I don’t understand how or why the stones were physically placed here 5,000 years ago, but I find this a powerfully moving thin place.

Down the road in Kilfenora, a cathedral dates to the 12th century, although a monastery founded by Saint Facthna was probably built on this site in the 6th century. The Clare County Library provides an excellent description of the Cathedral and its history. Click here to read more. 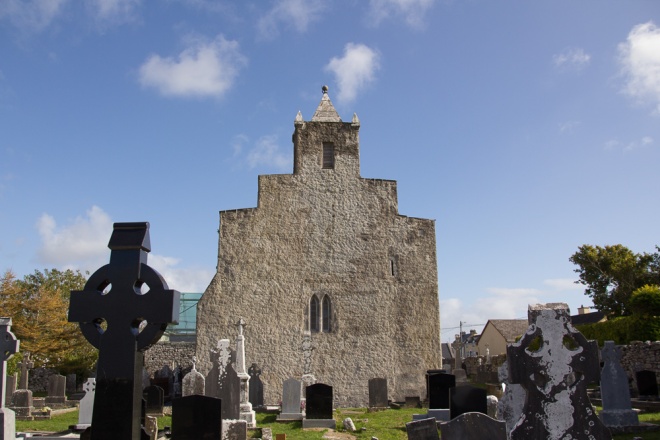 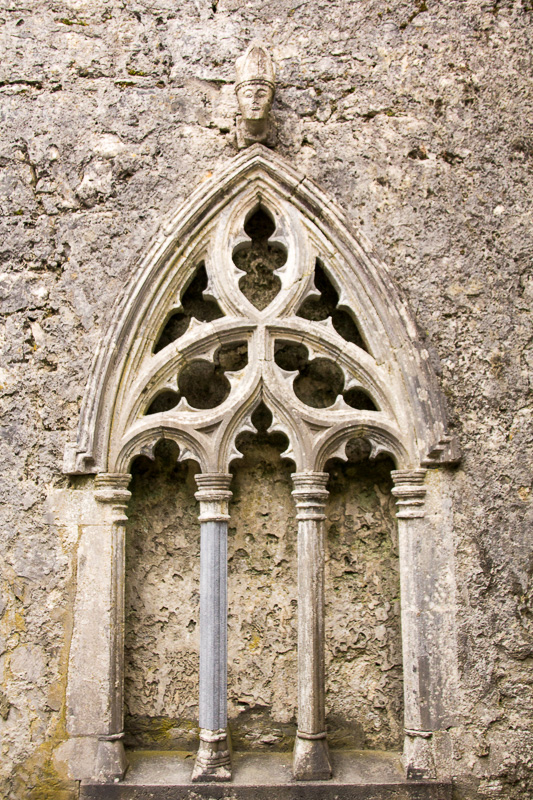 While the Cathedral is relatively intact, more impressive are the high crosses of Kilfenora. Again, the Clare County Library provides text by Jack Flanagan titled “The Stone Crosses of Kilfenora.” This link provides detailed information about the different crosses. 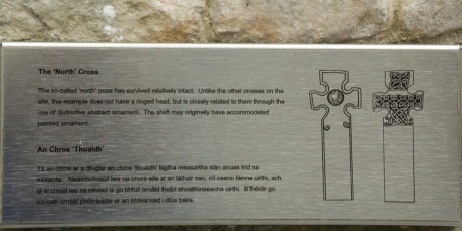 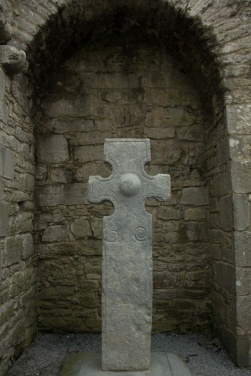 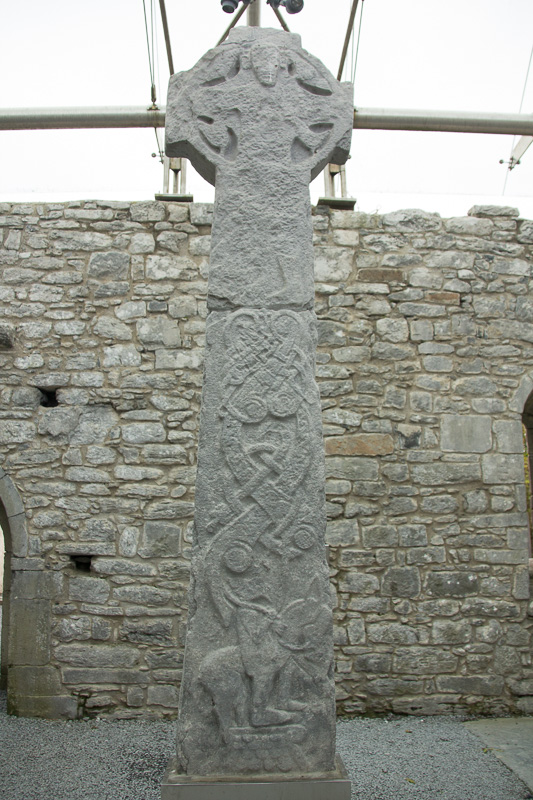 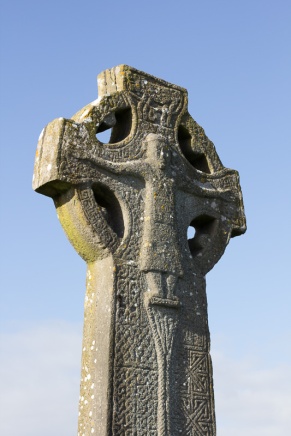 Many of the high crosses have been relocated into an enclosure attached to the Cathedral. Several are Celtic crosses, commonly believed to represent the blending of Christian and pre-Christian traditions, with a circle that encloses the four arms of the Latin cross. There are various theories about the creation of the Celtic cross but there is no definitive evidence to support one theory over another. Most high crosses in Ireland are from the 8th century onward, while St. Patrick came to Ireland in 432 AD, so it is unlikely that St. Patrick created the symbol. Nonetheless, Celtic crosses dot the landscape and are prevalent in both Catholic and Protestant cemeteries and graveyards around the country.

On the way back from Coole Park near Gort in County Galway (former home of Lady Augusta Gregory), I found the ruins of an amazing monastic village at Kilmacduagh. Technically in County Galway, I include Kilmaduagh here because I discovered it during my time in Ballyvaughan! In addition to an abbey that was probably built in the early 7th century by Saint Colman MacDuagh (son of Duac), there are several other churches and a 112 foot round tower dating to the 10th century. Incidentally, here’s a little Irish language lesson. The word “kil” or “cille” means “church,” so Kilmacduagh literally means, “church of the son of Duagh” (Duac or Duagh was a 6th century Irish Chieftain). 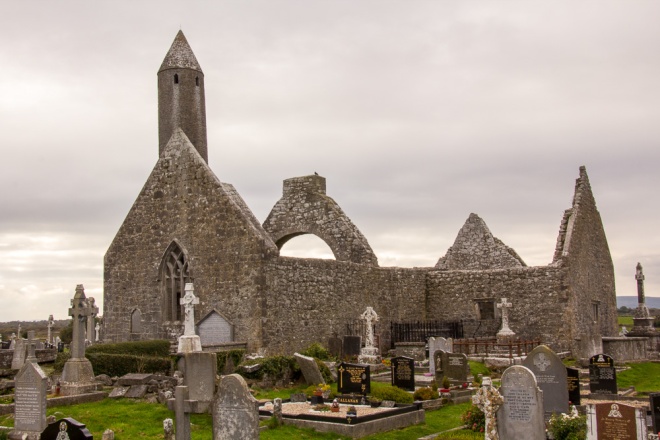 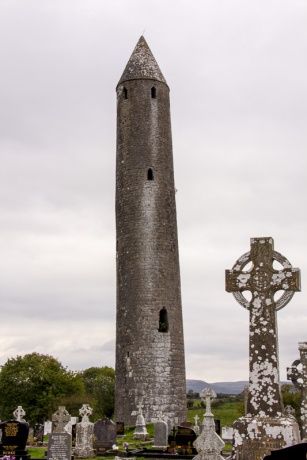 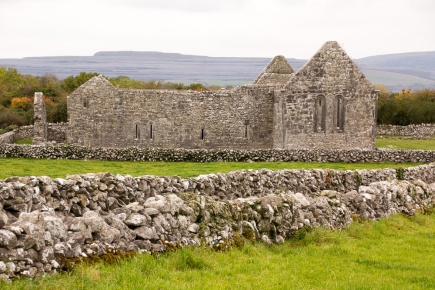 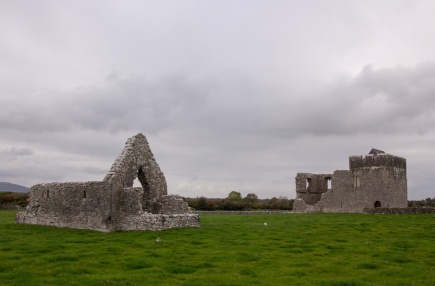 As I walked through the cemetery at Kilmacduagh, and around the “seven churches,” I felt I was in a sacred space. There is an almost palpable intensity of spirit. Since I’ve been in Ireland almost three months now, I’ve become more comfortable with this type of thick atmosphere. I realize that sounds contrary to a thin place, but I think some of the thinnest places are the ones that have the heaviest … presence. I don’t know if it’s the spirit of God, the ancestors, or just my imagination, but all of my senses respond as if they are on “high alert.” “There is something here: let yourself just feel,” I sense in my heart. And so I walk, and I wait, and I feel, and I come away feeling renewed, touched by something outside myself.

If a place can be dignified, Corcomroe Abbey certainly is. This monastery, off a little side road near the curve in the N67 of Bell Harbor, is also known as Sancta Maria de Petra Fertili or “St. Mary of the Fertile Rock” and was built in the late 12th century by the O’Brien clan. The abbey is built in the shape of a cross, and the architecture is simply amazing: arches and ribbed ceilings, carved tombs, gorgeous windows. The site is entirely open to the public and even weddings are held here! But on the days I visited, no one was present, except some cow friends and crows. It is a still, powerful place, set in a quiet pasture in the midst of the rocky Burren. 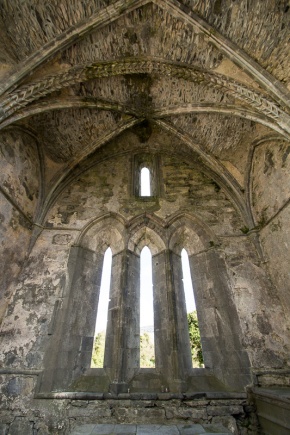 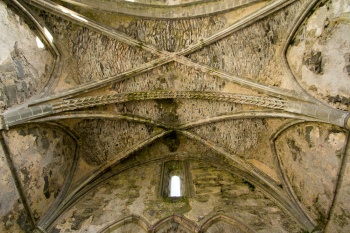 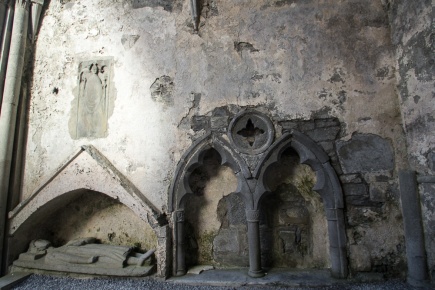 Ireland’s past is present here in County Clare. The final place I’ll discuss is where the past and the present are intertwined. A holy well outside Liscannor, just a wee bit south of the Cliffs of Moher, is a sacred site pilgrims still visit, similar to the Tobernalt Well in County Sligo. Brigid’s Well near Liscannor sits directly beside the N67 roadway. A large statue of the Saint is enclosed in a glass case in the middle of a flowery courtyard, with the well to the left of the statue. The interior walls and shelves of the constructed cave are covered with mass cards, photographs, statues, ribbons, and other objects. Messages are written on the walls, usually requests for prayers. It is a sacred place, and I felt a bit like an intruder. 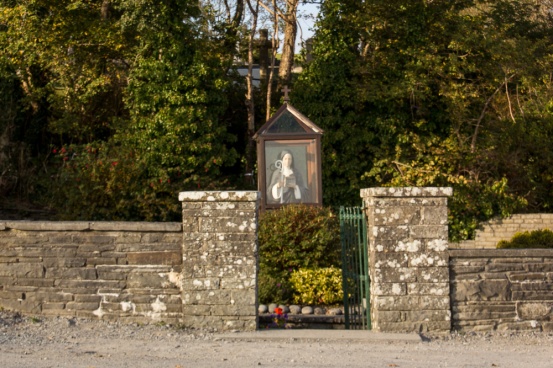 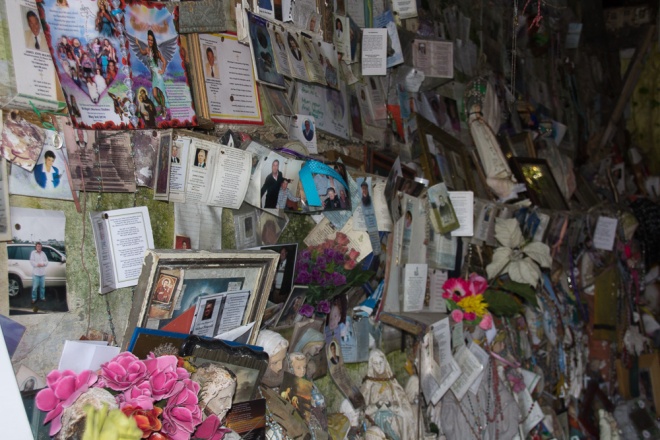 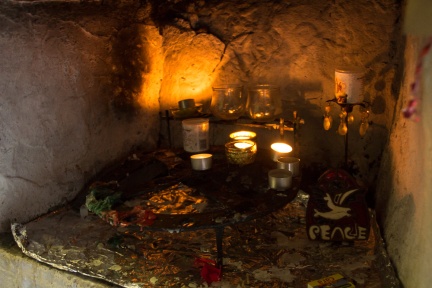 Dedicated to Saint Brigid, Ireland’s most popular female saint, the well is also believed to be connected with the Druid goddess, Brede, or Brighid, who was one of the Tuatha Dé Danann, a mythological supernatural race of the native Irish. Both Brighid and Saint Brigid are protectors of the home. Brighid is associated with fire, since originally the hearth was the center of the home, and she is also goddess of poetry, creativity, and fertility. She is generally seen as the Mother figure. In blending the ancient with the more recent past, Saint Brigid’s feast day is also at Imbolc, February 1, the beginning of the spring planting season. On this day, it is traditional to weave a Brigid’s Cross from rushes or straw, to protect the home, and throughout Ireland, these crosses are placed above or beside doorways. To read more about the goddess Brighid, click here.

Outside the enclosure, a walkway leads up the hill to the cemetery. On either side of the steps are two trees covered with strips of ribbon and string. These are often called clootie trees, rag trees or wishing trees. As a child, my own mother told of the superstition that when fabric belonging to a person who was ill was tied to one of these trees, the person would be healed once the rag had rotted away. While the origins of this tradition of tying strips of fabric on sacred trees are unknown, Nigel Pennick in his book, Celtic Sacred Landscapes (1996) suggests that perhaps the tradition began when traveling Celtic priests would hang their valuables in trees while they slept. 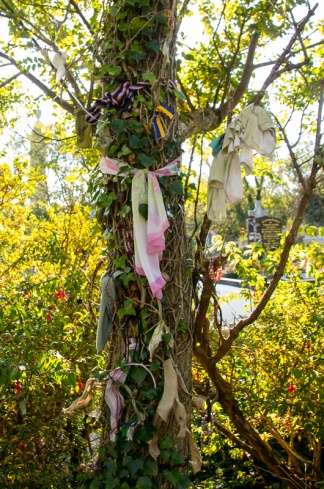 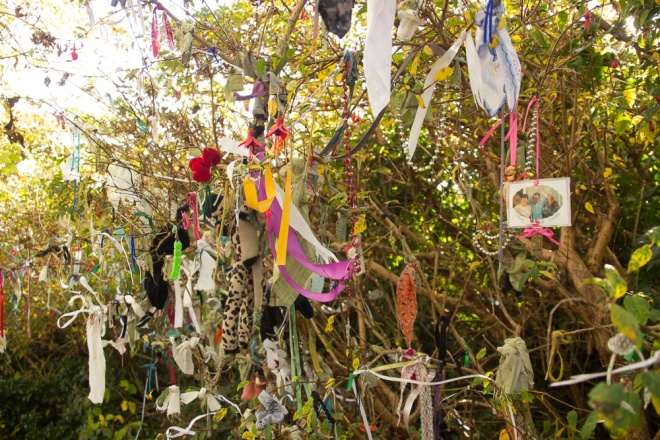 Saint Brigid’s Holy Well is clearly a thin place for many people, and throughout County Clare, I saw the blending of both Christian and pre-Christian belief systems: the overlap between faith and what some may call superstition, the marriage of past and present, the mystery of the ancient and sacred. Saint Brigid’s (or Brighid’s) Well, as well as the abbeys, monasteries, and portal/passage tombs “speak” witness to powerful belief systems, places that continue to resonate within the heart of those who seek thin places. 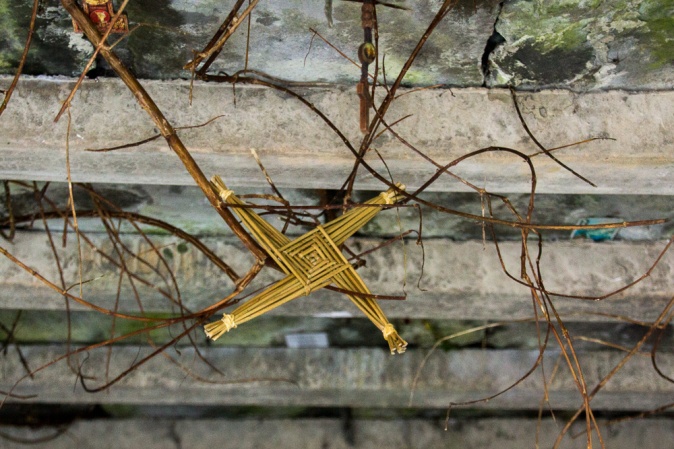 Brigid’s Cross, Inside the Holy Well at Liscannor